Melody, the success story of a headless CMS!

Melody is now a reference content manager for many media groups. The story of a success story that began in 2008... and that led this headless CMS to the other side of the Atlantic !

Behind a beautiful story, there is always a vision. That of a scenario, of its possible twists and turns... And of its outcome, whether it is a goal, an end point or a half-open door. Bruno Génuit, founder of Melody and his CMS headless, had this vision in 2008. At the time, the press was facing one of its biggest revolutions: the digital transformation from a purely print newsroom to one that feeds the web. Or even that would make the latter its workhorse.

And the site is huge! Certainly, in the regional and national daily press, the question of the web was raised very early: as early as 1995, Libération, Les Dernières Nouvelles d'Alsace, Le Monde started to go digital, quickly followed by other daily newspapers in 1996. However, in 2008, the uses, driven by a technology that is still in its infancy, still require a lot of adaptation. This is why Bruno Génuit launched Demain Un Autre Jour, now Melody.

"At the time," he confirms, "I wanted to set up an activity to do consulting and support editors in the evolution of their profession." 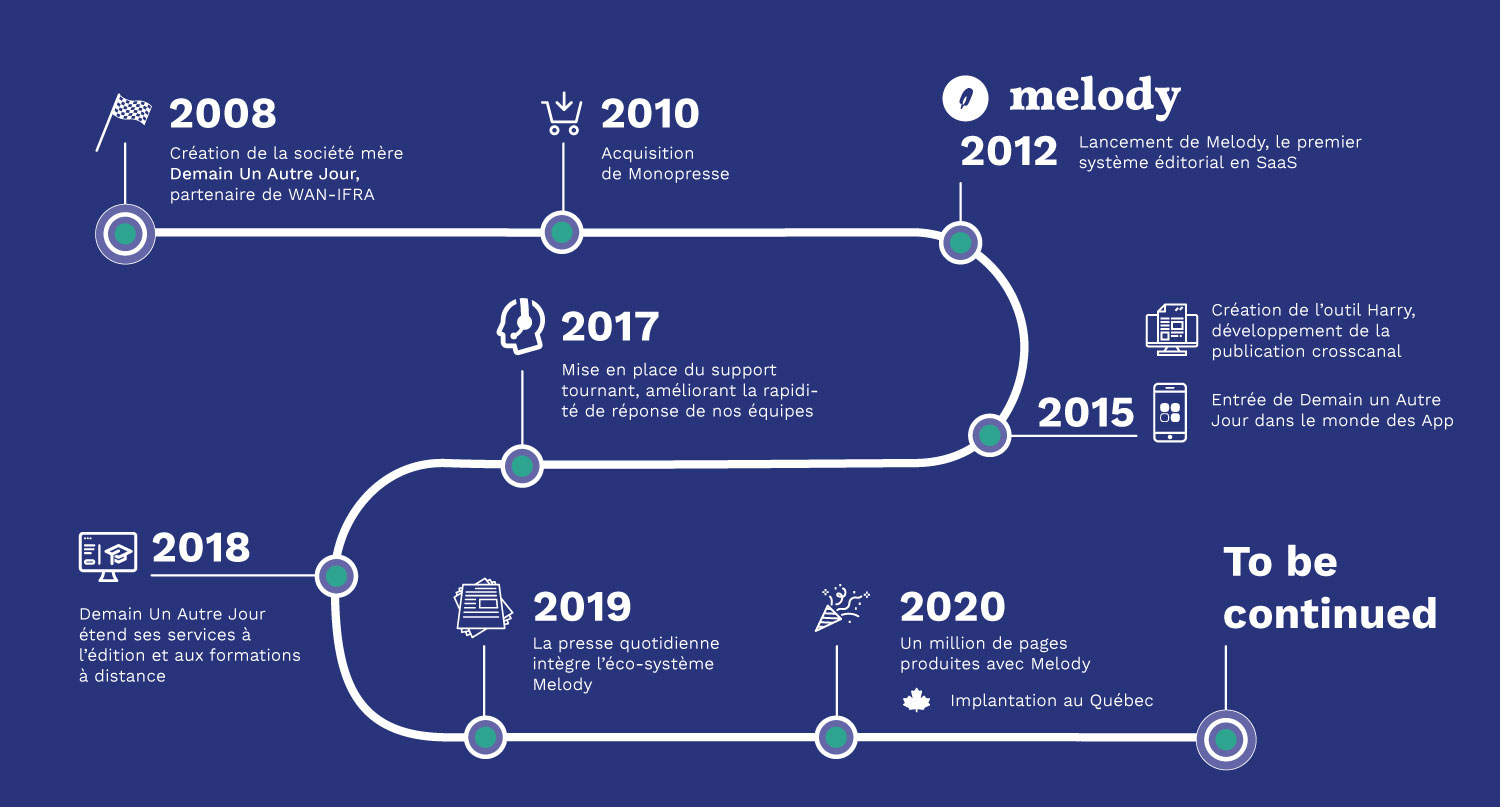 The time-space revolution and the advent of the content manager.

Because, more than ever, tomorrow would be another day. "I had a leitmotiv: the whole profession had to expect a huge change, especially in the question of time. A revolution because, with the Web, it is, on the one hand, the information or the current events which guide, imposing a situation of permanent looping. And, on the other hand, the advent of multimedia."

In short, for information, a change of temporality and depth.

A change that requires adapted tools! In 2010, thanks to the acquisition of Monopresse, a prepress business, Demain Un Autre Jour became visible to major media, establishing itself in the sphere of software providers, particularly through PDF certification. Until the turning point, the decisive chapter... Bruno Génuit recounts: "In 2012-2013, with my associates who are pure developers, true experts in new technologies, we embarked on the realization of a complete editorial system for a regional weekly press group, the Courrier Français."

Melody was born. With the ambition to make it simpler, faster and even better. How did it work? By combining two distinct layers: a CMS, a content management system, and the creation of pages. And by removing one of the obstacles of the actors of the time, the price, thanks to an unbeatable subscription offer.

A headless CMS... but millions of pages !

Melody quickly became an established part of the Weekly Press landscape, accompanying a hundred or so references. The first 1,000 pages produced for Courrier Français were followed by thousands and tens of thousands of news items. Until the millionth, reached in 2020, after having solved the problems of Corse-Matin, a daily newspaper converted to web first thanks to Melody. One million pages produced, 35 sites fed, 1500 weekly users and an increasingly high level of satisfaction...

The secret of this success story? Content. " To design our tool, we sat down with journalists, the very people who inform, tell stories and publish," explains Bruno Génuit.

"Many CMS seem to fulfill their missions, but they often end up imprisoning their users in quasi-insolvable production constraints. With what follows: need to copy and paste between web and print versions, waste of time, lack of fluidity..."

This logic had to be overcome by focusing on content rather than the page and by maximizing the journalist's agility. Thus, with Melody, the journalist can juggle between the versions of his article, see the automated layout, enrich his content thanks to the numerous web tools... 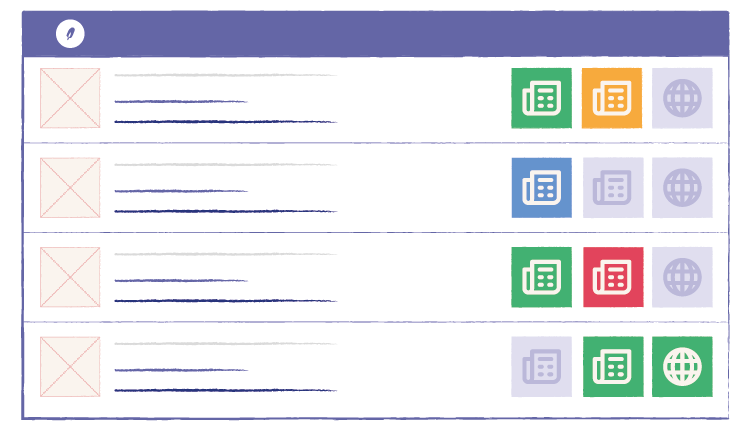 For Melody, a new world to come !

Stories are always more beautiful when you can imagine the continuation. And, for Melody, this continuation goes from Molière to Shakespeare. "The future of Melody lies in conquering the North American market, where we already have a foothold, and the English-speaking press in general, " says Bruno Génuit. "This should enable us to achieve our goal of doubling our sales and increasing our workforce by 50% within three years."

With one thought in mind: "Melody is now reaching a form of maturity and we are ready to take on new challenges. Our know-how in automation and multi-channel publishing means we can now target new markets, such as print content personalization, catalog production or branded content management."

The most beautiful pages are still to be written !

I promise, no more than one email per month!

Interview with Bruno Génuit at the Press au Futur 2022

Cyril Boutier : "The simplicity of using Melody seduced us right away".

Claude Perrier : "Melody is a tool that works for the modernization of France-Antilles

Our solution.
How it works.
Melody.

Page load link
Melody uses cookies to measure the audience of its website. These cookies are shared with Google (Google Analytics).
You can accept or refuse them, and modify your choices at any time by clicking on " Cookie Management" at the bottom right of our site.

This website uses cookies to improve your experience while you navigate through the website. Out of these, the cookies that are categorized as necessary are stored on your browser as they are essential for the working of basic functionalities of the website. We also use third-party cookies that help us analyze and understand how you use this website. These cookies will be stored in your browser only with your consent. You also have the option to opt-out of these cookies. But opting out of some of these cookies may affect your browsing experience.
Necessary Always on
Necessary cookies are absolutely essential for the website to function properly. These cookies ensure basic functionalities and security features of the website, anonymously.
Functional
Functional cookies help to perform certain functionalities like sharing the content of the website on social media platforms, collect feedbacks, and other third-party features.
Performance
Performance cookies are used to understand and analyze the key performance indexes of the website which helps in delivering a better user experience for the visitors.
Analytics
Analytical cookies are used to understand how visitors interact with the website. These cookies help provide information on metrics the number of visitors, bounce rate, traffic source, etc.
Advertisement
Advertisement cookies are used to provide visitors with relevant ads and marketing campaigns. These cookies track visitors across websites and collect information to provide customized ads.
Others
Other uncategorized cookies are those that are being analyzed and have not been classified into a category as yet.
Save & Apply
Go to top